USA Today (“USAT”) released its annual survey of head football coach compensation terms on Wednesday afternoon[2]. The USAT compensation database has become the go-to resource for salary information, in part, because it is current to the year in question (e.g., many coach contracts allow for annual, discretionary increases to salary and the USAT team goes to great length to update and verify these amounts on an annual basis) and because it follows a consistently-applied methodology[3] in distilling lengthy contracts to key economic terms.

One of the features of this year’s edition was a thorough analysis of the current amounts due to a coach should he be terminated without cause (for purposes of this article, “payouts”). The deviation between the lowest published amount (from $30,337 for Doug Martin to a staggering $40,000,000 to Dabo Swinney) provided fertile ground for discussion on the issue. The payout amounts were largely responsible for what USAT determined to be the “five deals that provide the least value for their respective schools.[4]” At the outset, it is important to clarify that a payout represents a potential, rather than a given or fixed, cost. Therefore, the value of a payout is more appropriately considered not by its potential cost to one party, but instead by the benefits derived by both parties to the contract, net of its likely cost.

Before jumping to any conclusion about the reasonableness of these amounts, it is important to consider the context and circumstances that drive many of the decisions about payouts. To provide such context, we reviewed the long-form contracts for the head football coaches at fifty[5] Power 5 institutions. From this group, we analyzed payout provisions[6] for out-years in each contract (as opposed to the current year terms shown in USAT).

When Are Payouts Triggered?

The USAT methodology views payouts applicable in the current year only. A better understanding of payouts, and their reasonableness relative to the market, is gained from analyzing payout amounts relative to the same[7] contract year.

During the last three off-seasons, 41 schools initiated head coach changes. The average coach tenure at the time of termination was 4.85 years. Coaches were fired before their fourth year on the job in less than 20% of those circumstances. Consequently, the better metric for evaluating the payout market is what the contractual payout would be if the coach were terminated following his fourth season at the school. Among the reporting institutions, the average year 4 payout is $6,535,548 and the median is $4,333,334. These amounts equate to 158% and 136%, respectively, of reported current-year compensation.

Because payouts accompany the termination of a coach without cause, they concurrently represent a potential cost and a potential value to coaches and universities. From the university’s perspective, the primary consideration driving payout amounts is whether the value to the program in retaining the coach will be greater than the product of the payout multiplied by its likelihood.

Terminations prior to the start of a coach’s third season are extraordinarily rare. To wit, of the 41 terminated coaches in the above-referenced sample set, there were only 2 circumstances of a coach being terminated without cause prior to his third season. Those circumstances were similar and unique in that (a) each coach was promoted to the position from an interim role, (b) by an athletic director who was subsequently replaced, and (c) each held some relation to widely-condemned off-field issues at their school. However, coach tenure continues to creep downward, leading to speculation that some coaches may be on the “hot seat” after a mere two years. 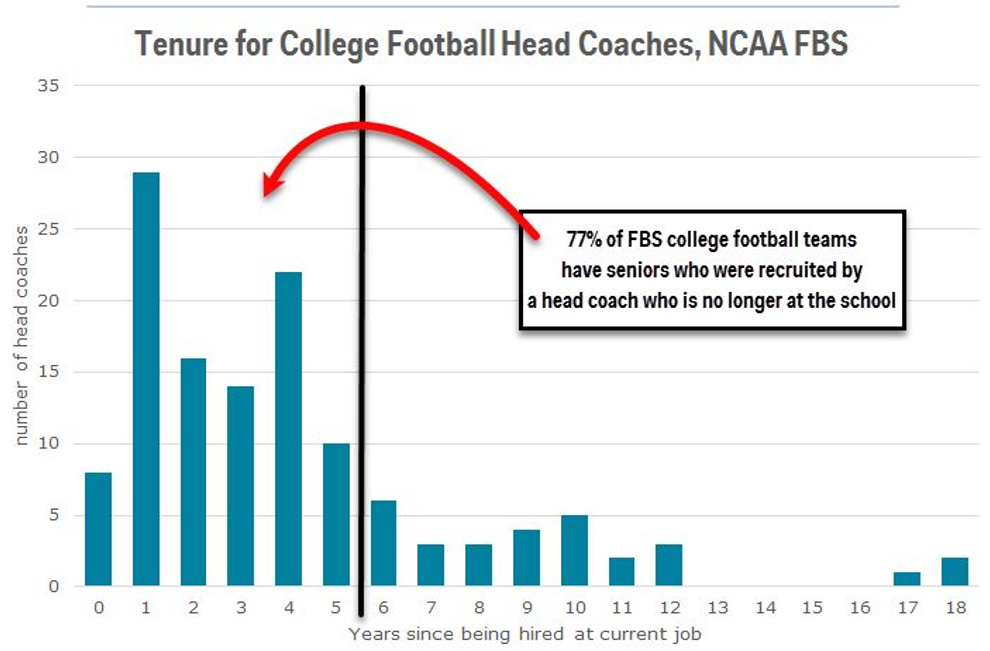 In light of those data points, consider the following “hypothetical”:

If either coach were to struggle in year 2, which of the two athletic directors is more likely to face unreasonable demands from the school’s stakeholders (fans, boosters, student-athletes, coaches, athletics and university administrators)? If the opportunity cost of keeping a coach is perceived as being greater than the actual cost of terminating that coach, the stakeholders are more likely to demand the termination, no matter how unprecedented.

As head football coach tenures continue to trend downward, coaches are likely to demand and athletic directors are likely to accept large payout provisions as a shield from the often unreasonable demands of outsiders. A large payout early in the coach contract affords meaningful value to coaches and perhaps equates to recruiting success and on-field performance (a large payout offers greater assurance to current and prospective student-athletes that they are more likely to complete their collegiate career under a single coach) with no out-of-pocket cost to a school. Similarly, sought-after assistant coaches are intensely mindful of the job security of their head coaches or potential head coaches. Consequently, the prudent athletic director will balance the front-loaded payout structure in recognition that year 4 is, statistically, the prime evaluation year. A thoughtful payout structure aligns the expectations for the school, coach and stakeholders alike.

To this end, the following represents the largest difference between current payout and year-4 payout:

Discounts to Payouts: By Law and By Contract:

Most states laws invoke the mitigation of damages doctrine. Simply put, this doctrine imposes a duty on a person who has suffered damages to take reasonable action to avoid additional damages. In the context of a payout, the coach is the person that has suffered damages; the loss of his job without cause. Except in circumstances where doing so is impossible (e.g., disability) or highly impractical, most courts would require a fired coach to seek and secure other employment as a means to mitigate the University’s financial obligations under the contract. Thus, universities typically enjoy the benefits of mitigation even if the coach contract it negotiated is bereft of an express mitigation or offset provision. But because many universities are unsatisfied with the time, expense and uncertainty of a common law remedy, they negotiate express liquidated damages provisions that limit their payout exposure (30 of the 50 contracts in the sample set discussed herein include some variation of a mitigation/offset clause).

Willie Taggart’s employment contract with the University of Oregon is instructive in its consideration and treatment of important payout and mitigation issues. For example, Oregon’s payout obligations in the context of a termination without cause are limited in several ways:

Effect on Assistant Coach Contracts. It is also becoming more common among FBS schools to reduce the payouts to  its assistant football coaches to a sum less than the remaining compensation due under their contracts (usually stated in terms of a percentage of remaining salary or number of months of salary) in the event their head coach’s employment is terminated for any reason.

An aggregate reading of the foregoing reveals that the true cost of payout figures must be considered in context; the contract’s terms as well as the individual(s) involved and the employment market for those individuals at a given point in time can dramatically affect the true cost of the payout.

Coach contracts represent one of many costs attendant to the successful operation of a college football program. Astute administrators, coaches and commentators recognize that coach contracts (and the myriad economic components contained therein) must be viewed in the context of a program’s global circumstances in order to assign value based on any one term.

[1] Roger Denny & Bob Lattinville are co-chairs of the Spencer Fane LLP Collegiate Athletics Legal Team. Denny & Lattinville also collaborate with USA Today on the annual football coaches, men’s basketball coaches & athletic director salary databases as well as other athletics compensation databases which can be found on ADU. The pair can be found on Spencer Fane’s website.

[6] Payout amounts are determined as of December 1, 2017 of the year in question. Amounts do not take into account per-day pro-rating for a partial contract years.  Longevity and/or retention payments were also not included in the calculated amounts.

[7] For each contract analyzed, the first contract year was determined as the most recent contract or amendment in which the term was extended.

[9] Coach Leach’s, and others’, contract contains a rollover provision whereby the term of employment is automatically extended, unless either party provides notice stopping further extension before the extension becomes effective.  For purposes of identifying contract years in this article, we have assumed, in each instance, that such notice was delivered at the outset of the current term.  For example, if Washington State were to terminate Coach Leach’s employment, without having previously stopped the automatic extensions, it would owe a payout determined with reference for the then-remaining 4-5 year term, as opposed to the remaining 3 year term resulting from the assumption used in our methodology.  Accordingly, the payout numbers calculated for this article are likely lower than the amount that would actually be payable by the school.

In the latest edition of the Experts’ Roundtable series, AthleticDirectorU chats with Women’s Golf sport administrators on a variety of topics, including partnerships with Head Coaches, international student-athletes, the .500 rule, the Transfer Portal & more.   What tenets do you operate by when administering a sport program? Are you hands-on or hands-off? Do you

Articles
The Relationship Between Staff Continuity And Team Performance (Part I)

Staff turnover at the NCAA men’s basketball division 1 level is par for the course. If you add up all of the head and assistant coach seasons from 2007-2019, there were 16,686 seasons coached. In those 16,686 seasons, 4124 ended with a job change either by promotion, demotion, or moving to a new school. In